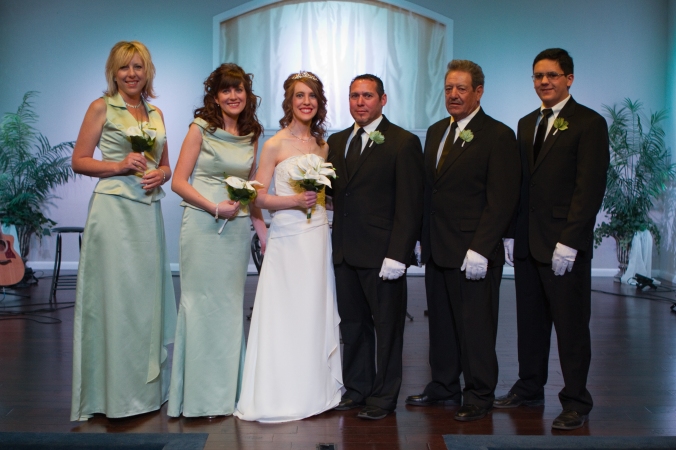 For years I, like many other girls, dreamed of being married.  I set my dream in motion in several ways. In 2000, when I was nineteen-years-old, I wrote “A Dream Come True,” a song I planned on singing to my husband as I walked down the aisle.  I also sketched out wedding plans with a pencil on lined paper. That same year, I wrote the song “I’ll Find Him with You,” declaring that God was my matchmaker.  Over the years, I invested in my friends’ weddings with the anticipation that it would one day be me.  Even then, despite the strong desire and declaration of my trust in God, my saga toward marriage took longer than some.  Though I turned down several potential suitors (including some complete strangers and brash coworkers), the faith adventure behind my dream began when I was around twenty-six-years-old.

One night in 2007, I walked across a dark parking lot to my car.  As I drove to my tiny apartment, I felt the urge to pray for a husband. Though the desire in my heart was real, I hadn’t really prayed for one in the past.  That night was different.  I had just left a prayer service and I was spiritually sensitive.  Somehow, I just felt that it was time for me to send my petition—seriously—to heaven.  “God,” I prayed quietly, “I pray for a husband.”  Within moments, I received God’s response. As tears gathered in my eyes, I distinctly heard God speak to my heart, “Request granted.”

It was wonderful to have a direct word from Him, but even if He had not chosen to say something specifically to me, I had two inspiring verses to stand on:  Therefore I say to you, whatever things you ask when you pray, believe that you receive them, and you will have them. (Mark 11:24) Now this is the confidence that you have in Him, that if you ask anything according to His will, He hears you. And if you know that He hears you, whatever you ask, you know that you have the petitions that you have asked of Him. (1 John 5:14-15)

A few months later a friend and I had a chance to go to a church conference out of town.  I preceded the trip with prayer, releasing the event to God’s purpose.  At one point, He stopped me and said, “Relax.  This is My gift to you.”  I stopped and started packing!  Toward the end of the conference I was introduced to a young evangelist.  This excited me because I had always felt called into the ministry.  I went to my hotel room later, praying that God’s will would be done . . . but deep down, I knew what I wanted.  Though this young man had acted interested, and it seemed like such a God-setup, he did not pursue. I went back home with anxiety attacking my mind. Why didn’t he pursue?  Had I done something wrong?  Was this part of God’s gift to me, but had somehow gone wrong?

For months I mulled over every detail of the event.  Thoughts plagued me day and night, disrupting my peace at work, church, and home.  No matter how hard I tried, I could never find any answers to settle anything in my heart.  The dream I had so longed for had entered my life but had disappeared just as quickly.  I was left floundering in self-pity, frustration, and anxiety. I had never been under so much mental strain before.  Hope deferred had made my heart-sick (Proverbs 13:12).  I didn’t realize it then, but I was not trusting God. My faith was shaken.

In June of 2007, one of my neighbors at my apartments – a clean-cut man in his thirties – asked me out on a date.  I didn’t have peace about going out with him so I politely declined.  I knew I had made the right decision, but I was still dejected.  How many times was I going to have to say “no” to someone’s advances?  When could I give my heart away and enjoy the company of my first boyfriend?  I felt discouragement overtake me.  That’s when I heard God quietly tell me, “Christa, let Me hold your heart until your husband comes.”  Those words  inspired a song I wrote called “Hold My Heart.”

In  2008, I penned the song “Can’t You See,” stating my love for Jesus and the treasure my future husband would receive when we married.  Then in July of 2008, I began to write an outline to a book called I’ll Find Him with You, inspired by the song of the same name. The book covered allowing God to design your love story, trusting Him, and keeping your standards when it came time to choose the right man. It was all I believed and lived by.

On January 23rd, 2009, God led me to pray for my future husband – whoever and wherever he was.  So I began to pray a general prayer of protection, grace, and guidance over him as I would do over anyone else.  However, when I began to pray in the Spirit, the prayer came out of me like a gusher.  My prayer language sounded different than usual, so I knew I was interceding for something specific. Just as quickly, the prayer language stopped and went back to normal.  I had no idea what my future husband might have faced at that moment in his life, but I wrote in my journal that night: “My husband is only successful!  He has the victory!”

A few months later, in August of 2009, I was asked to move to Dumas, Texas to be on staff at another church. Shortly after the move, I was diagnosed with something that could potentially scare some men away.  However, I knew that God’s will for me was healing, so I stood on my redemption promises.  I believed that with God all things were possible, so I didn’t give up on my desire for a husband.  While I was at it, I added a request for a house to my prayers.  I called it my “Three H’s” – healing, husband, and house.  I thanked God for them every day because as I John 5:14-15 says, I had them the moment I asked!

As an act of faith for my future husband, I started to write the manuscript for I’ll Find Him with You.  Shortly after finishing the manuscript, I bought my first house!  It was a perfect size for a small family with a beautiful yard, trees, extra drive way, garage and workshop. (Little did I know that my future husband would take pride in taking care of a yard and working in a shop.  He would also own a trailer that would fit perfectly in the double driveway.)

In May 2011, a man – mutual friends of a couple of ministers I knew – asked to be friends on Facebook.  I suspected it was for romantic purposes, but I gave “John” the benefit of the doubt and added him as a friend.  Sure enough, he asked me out.  I turned him down three times because of a lack of peace, but eventually caved, giving him “a chance.”  However, I disconnected after three weeks of communication, knowing he was not the one for me.  He was rebounding badly and had other issues that showed up after we stopped communicating.  I had disobeyed the Holy Spirit by going out with him, but God was merciful to protect me from a bad choice.  It proved to be a counterfeit set up by the devil to keep me from meeting the “real man.”

Unknown to me, a man named Michael Madrid had started attending our church a couple of months before I went out on a date with “John”.  Michael spent weeks attending and eventually noticed me.  While I was totally oblivious to his existence, he watched from afar as I came and went with the children I taught in children’s church.  He had started to get his hopes up when “John” and I sat together at two services in church.  Michael had thought I was single, but when he saw me with “John” and his two boys, he assumed I was married.  Once John was out of the picture, though, Michael discovered I was still single and made his move.

On June 23rd, 2011, he introduced himself.  He and other men in the church strode into my classroom carrying chairs.  The moment he walked through the door, he said, “You must be the children’s minister.  Better you than me!”  My first humorous thought was, “Hmmm.  A child-hater,” but I didn’t hold it against him.  That night he attended a meeting designed to help people get involved in the church.  Michael introduced himself and I was immediately attracted.

From then on, we talked regularly after church.  I was impressed with his character and standards.  Before long, it became clear that he wanted to date me.  Since I had no intention of dating someone I wouldn’t marry, I quizzed him on some key topics, including the doctor’s diagnosis.  He didn’t have a problem with it at all.  In fact, he stated, “The way I was raised, if you liked someone, you took the good and the bad.”

On May 27th, 2012, we got engaged!  Once I knew I would marry him, I asked him something I had simply “hidden in my heart” for the past three years: “What were you doing in January of 2009?”  He responded, “Oh, that was a bad year.  I wasn’t even talking to my family.”  That told me he was in serious trouble since he and his family are very close!  I was encouraged because I knew my prayer in 2009 moved God’s hand on his behalf!

I started to plan the wedding ceremony, pulling out of my keep-sake stash of notes I had made. The pencil-sketched plans came to life as I shopped for topiaries, a simple dress, and reception food.  I collaborated with my brother and recorded my song. On March 16th, 2013, I walked down the aisle to that tune and made my vows to the man God had reserved for me!

As I look back on all the steps that led me to my wedding, I stand in awe of God’s faithfulness.  He was faithful to honor my faith, and sent me a husband.  He was faithful to protect me from the wrong relationships so I could find His will and His best.  He was faithful to give me words of encouragement to keep me going when I was discouraged.  And I know He will be faithful to fill our marriage with His goodness so we can fulfill His purpose!  He indeed makes dreams come true!