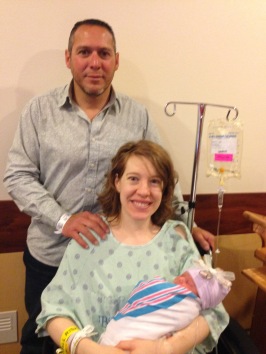 August 3rd, 2015.  I’ll never forget that day.  It was the day I found out I was pregnant.  As I drove home from Amarillo, I had a suspicion that I could possibly be pregnant.  I drove straight home, but was too agitated to stay there.  Grabbing my purse, I headed to CVS to buy a pregnancy test.  Once home again, I took the test.  Sure enough, the first one was positive.  Just to be sure, I tried the second one.  Positive.  Growing panicky, I called my pastor’s wife to find out how trustworthy the tests could be.  She assured me that they were very reliable.  I was heartsick.

When Michael and I had agreed to get married, we decided not to have any children.  Michael was 40 years old and didn’t want children late in life.  I didn’t have a strong desire to have my own children and was content pursuing my ministry.  For that reason, when I discovered I was pregnant, it was not a joyous occasion.  All I could see was the work that would go into it, and the possibility that it may interrupt my ministry opportunities (writing books, preaching, etc.).

We didn’t stand a chance, however!  Behind the scenes, my mother and another woman in our church had prayed for us to have a baby. The church member, Elsa, knew in her spirit that we would be excellent parents.  She also knew that it wasn’t about being ready for a baby or not. She was confident God hadn’t put us together for us not have at least one baby. She believes the people that benefit the most from our strengths and gifts are our children, so when she found out we weren’t planning on having children, she started praying instantly and secretively for a baby for us both.

Immediately after learning of my pregnancy, fear of miscarriage came to mind.  Since it was fear of something negative, I knew it was the devil.  I stood on John 10:10 and my redemption promises, knowing miscarriage was not God’s will, despite my inability to get excited.  God also gave me Isaiah 41:10: “Fear not, for I am with you; Be not dismayed, for I am your God.  I will strengthen you, Yes, I will help you, I will UPHOLD you with My righteous right hand.”  I pictured God’s hand under my womb, holding up my child. Over time, the nagging thoughts disappeared, and I began to focus adjusting to other pregnancy-related topics.

Time went by.  My tummy, of course, grew larger and a shower was thrown in my honor.  The nursery was decorated, and mentally we were getting used to the idea of having a child.  Most importantly, I compiled Scriptures and good confessions to speak over myself, Amaris, and our doctor in preparation for the delivery day.  Based on a past negative doctor report, I knew there could potentially be complications.  Other people had had hardship during their pregnancy and delivery, and I was determined that it would not be me.  I applied my faith toward a smooth and fast delivery, a healthy child, no problems, no c-section, and no epidural.  I knew, even if I didn’t understand the supernatural purpose behind having a child, that I had a right to a healthy and uncomplicated delivery and pregnancy.

I applied my faith as well toward supernatural strength during my pregnancy and delivery.  I desired strength to carry my child physically and strength to continue working as secretary at the church.  Isaiah 41:10 and Isaiah 40:31 were my theme verses.  My theme song toward the end of my pregnancy was “Soar” by Meredith Andrews, one I knew God allowed me to hear on the radio just for that purpose.

In October 2015, a mother of one of my past Christian Academy students saw me at church after a long absence.  She excitedly reminded me of an open vision she had had of me when I was working at the school (I had totally forgotten!).  In the vision, I was standing fully pregnant, “glowing and beautiful.”  She also told me that her grandson Aiden had known one morning – months before her visit and hundreds of miles away – that I was going to have a baby.  This was before even I knew I was pregnant!

In November 2015, I was in the shower when God spoke again: “There is a Samuel in your womb.”  We hadn’t discovered the gender yet, so I wasn’t sure if it referred to it being male, its future ministry, or both.  I simply put it on the back burner until I understood.

Finally, we discovered the gender.  It’s was a girl!  Though I was certain for weeks that it would be a boy (despite the word from God), I was happy because I could name her “Amaris,” my middle name.  I had always known that if I had a baby girl, I wanted to call her by that name, which meant “whom God has promised.”  However, I still didn’t understand the “Samuel” part fully.

On Valentine’s Day 2016, my pastor gave me the opportunity to preach at church in his absence.  I agreed to the date, though he was a little apprehensive that it would work for me.  My tummy was a full seven and a half months big, which left most women aching and finding it difficult to stand.  I was confident, despite fatigue off and on, that I could do it.  As God promised, my daughter and I stood with strength for a full three hours as I greeted at the church doors, participated in praise and worship, preached, and prayed for people at the end.  God was faithful to give me the supernatural strength I needed to do His will!  It bolstered my confidence for my future delivery date.

Toward the end of March, Pastors Anthony and Briana Curran arrived from Ireland.  We had known them for several years as part of our church before they moved to Ireland to establish a church.  During a church service with them, I knew they were supposed to pray for us.  We took them out to eat and invited them to our house to pray.  I sensed the presence of God as they did.  The prayers were anointed and exactly what we needed.  During one part of the prayer, Anthony prayed that Amaris would hear God’s voice as Samuel.  I knew immediately that this was what God meant.  She would be as Samuel, hearing God’s voice and speaking what she heard.

A week or so before my delivery date, Elsa asked if she could pray for me.  She prayed primarily for peace in every part of the delivery.  I knew she had heard from God.

At eleven o’clock in the morning on March 28th, 2016, I went for my final doctor’s appointment before my due date of April 2nd.  Dr. Griffin said everything looked good and we could plan on a natural delivery.  Praise the Lord!  Now just to wait…

I didn’t have to wait long.  That night between midnight and one o’ clock in the morning, I began to have contractions.  I didn’t realize they were contractions at first.  I thought Amaris was shifting around as she often did, putting pressure on my spine.  But no matter what I did, the pain wouldn’t go away. I began to count between contractions and found them to be inconsistent. Braxton Hicks, perhaps?  I laugh now at how indecisive I was!  To be absolutely sure it would be a worthwhile trip to Amarillo’s hospital (an hour away), I called my mom and pastor’s wife to get their opinion.  Both of them were quite sure it was the real thing since I’d never had Braxton Hicks. After the phone calls, my pastor’s wife called us back to share with us a Word from the Holy Ghost: we were to speak Shalom, peace, over the delivery (just as Elsa had prayed).  This bore witness with us, and I purposed to do so.

I counted some more and finally decided we should go to the hospital.  My husband Michael hadn’t packed yet, so we waited a bit longer as I dressed and moved my bag to the car.  Finally, at four in the morning, we took off to Amarillo.  Even then, prayer was needed.  Michael had bad night vision and had to work extra hard to stay in his lane!  All the while I counted my contractions.  Five minutes apart by then!  They had eased and were a mild ache – another of God’s supernatural blessings!

We arrived at the hospital’s emergency room at five in the morning.  Unfortunately, no one was at the desk!  After a few minutes we decided to make our way down the halls to the maternity ward.  Thankfully, the contractions were bearable and I could walk.  A hospital staff member met us in the hall.  We were a little turned around, so she offered to take us to the maternity ward while Michael parked the car.  She wasn’t able to locate a wheelchair for me, so opted for a wheeled office chair from behind someone’s desk!

I signed in at the maternity ward’s desk and I was admitted to a delivery room to get checked.  Shockingly, I was dilated to an eight!  I made two important phone calls, sent out some texts, and prepared myself for delivery!  The hospital staff said it was too late for an epidural, and too late for the antibiotics they had wanted to give me.  That was fine because I didn’t want either one of them!

Soon the contractions increased to more than I had experienced before.  As Michael stood next to me (another answer to prayer!), I gripped his hand with each contraction.  Everything moved so quickly that there was no time or need for the soothing praise and worship music, poster of Isaiah 41:10, and calming massages and stretches we had prepared!  Eventually they broke my water and we waited for the time to push.  The time came and within three or four contractions.  As I pushed, I remembered Isaiah 41:10 again: “I will help you.”  I trusted that God would help me push successfully.  And He did!  Amaris – whom God had promised! – made her appearance at 7:57 AM, eight hours after my contractions started.  With dark, highlighted hair and fair skin, she was a picture of health and cuteness!

Two days later we went home.  As I had prayed, I arrived home with little pain.  The strength I had believed for was present to endure minimal sleep.  I can confidently say that my faith has grown and gone to another level.  God proved faithful through it all!  He had given us a healthy, beautiful child.  He had answered my prayer for strength, fast delivery, and minimal pain.  He confirmed His word by making provision for no c-section, no epidural, and no problems.  He had given us peace.  Now we have only to see what supernatural things He will do with a child in our lives!  What will we learn?  How will our faith grow even more?  How will we see that supernatural purpose unfold?