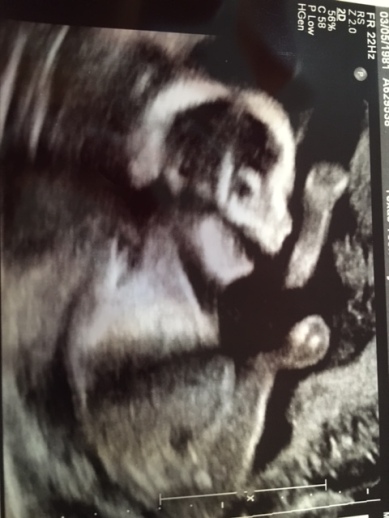 I wrote the following article when I was five months pregnant.  God uses a variety of events to teach you truths from His Word!

I’m five months pregnant!  So far I have had two sonograms in which little Amaris Christinita was moving around like crazy!  The machine has picked up her tiny fingers and toes, open mouth, and waving hands.  Zooming in, the sonogram tech was able to distinguish the different parts of the brain, kidneys, bladder, and other organs.  If there was any doubt that a baby existed in my growing tummy, it has been dispelled by undeniable pictures and movements!

Years ago, however, sonograms didn’t exist.  Even thirty-five years ago when I was born, my mother wasn’t given the option of a sonogram.  It was rarely used, and only for emergencies.  The pleasure of knowing the gender, or seeing the accurate growth of organs wasn’t possible.  The only proof of a pregnancy was physical symptoms, a growing tummy, and movement in the womb.

Could you imagine a woman who had an “I’ll believe it when I see it” attitude when she first felt signs of pregnancy?  “Yes, I know my stomach is getting big, and the doctor says I’m pregnant.  I don’t see a baby, though, so I can’t believe it’s actually there.” We would find this attitude ridiculous!

Sadly, we treat God’s promises much the same way.  When God’s Word says “by Jesus stripes you’re healed,” we often wait for symptoms to improve to believe it (Isaiah 53:5).  When God promises to supply all our needs, we watch the bank account to determine whether or not it’s true (Philippians 4:19).  When we pray for protection, we cower behind closed doors, not willing to live as if God will do what He said He will do in Psalm 91.  It’s as if we’re waiting on a “sonogram” to determine whether or not to believe.

This is completely opposite of what faith really looks like.  Faith doesn’t believe because it’s sees.  Faith believes regardless of what it sees.

True faith doesn’t depend on the visual to believe.  We weren’t there when Jesus died on the cross, yet we believe that we’re saved because we asked Him into our hearts.  We haven’t seen heaven, yet we believe we are going there one day.  We read Bible stories and consider them as factual.  Why then do we have such a hard time believing for things far less significant than our eternal salvation?  The answer is that our flesh has become so accustomed – especially in this culture – to place our day-to-day confidence in what we physically see rather than placing it in God’s spiritual reality.

God is a spiritual being, and everything He says and does starts in the spiritual realm.  When He says something, it’s as real as if it manifested in the natural realm immediately for our eyes to see.  He doesn’t think, “Maybe what I just said will come to pass . . . but then maybe it won’t.”  The moment He declared it, it was so, even if our physical eyes could not see it right away.  Like God’s faith in His own Word, our faith must be in His unfailing supernatural Word before we see it.  This determines the whether or not we receive the result in the natural.

“Blessed are those who have not seen and yet have believed.” John 20:29b

We would all like to see some tangible blessings in our lives! But are we willing to do what it takes to receive what God has promised in His Word as children of God?  To receive those blessings, we must forget about the “sonograms” and wholly trust in His Word.  God doesn’t operate any other way!