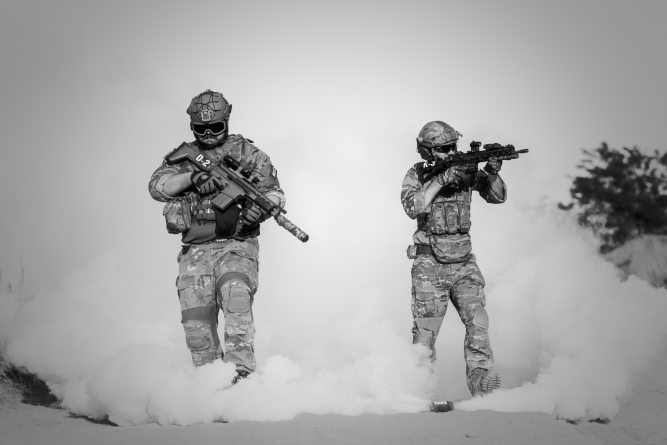 As we go through life and experience hardship, it’s important to know the root cause of our problems. Without understanding their source, we will not know who or what we’re against, when to give in or when to fight. Ephesians 6 is clear that we do not fight against people, disease, or even nature. Our battle is not physical but spiritual, against the devil and his armies.

Finally, my brethren, be strong in the Lord and in the power of His might.  Put on the whole armor of God, that you may be able to stand against the wiles of the devil. For we do not wrestle against flesh and blood, but against principalities, against powers, against the rulers of the darkness of this age, against spiritual hosts of wickedness in the heavenly place (Ephesians 6:10-12).

God and the devil have been opposite in nature since the beginning of time when the devil rebelled and was cast from heaven (Isaiah 14:12-17; Ezekiel 28:11-19). God created a good and perfect world (Genesis 1:31), but starting in the Garden of Eden, Satan has done nothing but wreak evil through his sinful nature. He turned Adam and Eve against God through disobedience (Genesis 3). From that day on, sin, sickness, poverty, and violence have been a part of life (Romans 5:17a).

Since then, God’s good nature has not changed (Malachi 3:6). He countered the devil’s evil with His goodness by urging His people to believe in Him and act in obedience to His Word. Finally, He sent His only Son Jesus to permanently strip the devil of His power through His sacrifice. It started with His earthly ministry and finished with His resurrection.

Having disarmed principalities and powers, He made a public spectacle of them, triumphing over them in it (Colossians 2:15).

Clearly, God does not collaborate with the devil and his ways. We know that sin is from the devil, but often the blame for sickness or some other tragedy is placed on God. Jesus, however, defeated both on the cross (Isaiah 53:5; 1 Peter 2:24). Galatians 3:13 says we’ve been redeemed (bought back) from the curses found in Deuteronomy 28. These curses include sickness, poverty, and destruction.

Christ has redeemed us from the curse of the law, having become a curse for us (for it is written, “Cursed is everyone who hangs on a tree”), that the blessing of Abraham might come upon the Gentiles in Christ Jesus, that we might receive the promise of the Spirit through faith (Galatians 3:13-14).

References in the Bible tell of instances when God placed sickness or plagues on people. It could seem that God operates like the devil, but there are a couple things to consider. First, those instances were always judgement on sin. People disobeyed Him and the consequence was hardship. Also, Bible scholars have found that references of judgement from God in the Hebrew are in the permissive sense. He allowed it to happen. As a just and Holy God, He could not protect them from something they chose to do that brought them into the devil’s territory—like Adam and Eve. They broke covenant with God and made it clear they wanted to follow their own way, which was ultimately the devil’s way.

Innately, we know what goodness and blessings are. Our God-ordained law enforcement knows to stop thieves, murderers, and liars, all sins addressed in the Ten Commandments written by God. We have organizations that protect children from parents who abuse their children. We support agencies that rescue women from abusive relationships. This desire to know and do good came from God. If God asks us to obey the Ten Commandment and to rescue others from hardship, yet does not do it Himself, He cannot be trusted. He would be as evil as Satan.

However, according to His Word, He is a good God and a perfect Father.

…how God anointed Jesus of Nazareth with the Holy Spirit and with power, who went about doing good and healing all who were oppressed by the devil, for God was with Him (Acts 10:38).

Every good gift and every perfect gift is from above, and comes down from the Father of lights, with whom there is no variation or shadow of turning (James 1:17).

“If you then, being evil [natural], know how to give good gifts to your children, how much more will your Father who is in heaven give good things to those who ask Him” (Matthew 7:11)!

No matter what trying situation comes our way, we must be solid on who the real source is. Confusion begins with uncertainty, but when we know who our enemy is, we know how to confidently act. We can follow Ephesians 6 and defeat an enemy that has only come to steal, kill, and destroy. Only then can we receive the victory God always intended for us to have!

2 thoughts on “The Real Enemy”