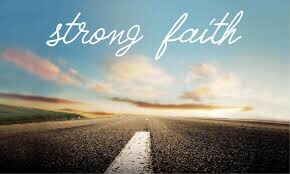 Weak faith considers what can be seen, staggers in unbelief, neglects praise, and is only partially persuaded. Strong faith, however, ignores what can be seen, walks confidently, gives God all the glory, and is fully persuaded! It never doubts God’s promises or His ability to perform them! Let’s be strong!
“And being not weak in faith, he (Abraham) considered not his own body now dead, when he was about an hundred years old, neither yet the deadness of Sara’s womb: He staggered not at the promise of God through unbelief; but was strong in faith, giving glory to God; And being fully persuaded that, what he had promised, He was able also to perform.” Hebrews 4:19-21