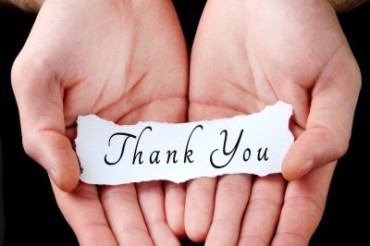 Everything about my pregnancy and delivery of my daughter was an answer to prayer.  For nine months I believed God for a healthy and uneventful pregnancy.  I trusted Him for a smooth, quick delivery with no cesarean section, epidural, or negative surprises.  Most of all, I desired a healthy baby.  As the faithful God that He is, He answered my prayer down to the smallest detail, overriding any negative report that may have surfaced before or after I found out I was pregnant.  Like never before, I felt overwhelming thankfulness that brings me to tears every time I think about it.  Shortly after my daughter’s birth, I read Luke 17:11-19, the story of the ten lepers.  It inspired this article on thankfulness.

In a world comprised of people whose goal is to get what they can the fastest and easiest way possible, thankfulness has become a lost art. We see people demanding benefits even though they already have much at their disposal.  We hear news of people discontent with their possessions, health, and relationships, yet who ignore the many people in the world that have so little.  The demand for more and the ungratefulness for less have turned the world sour.

Unthankfulness is listed among the sins that mark the End Times before Jesus returns. We wouldn’t normally think of it as a sin, but God finds unthankfulness as repulsive as disobedience and greed.

But know this, that in the last days perilous times will come: For men will be lovers of themselves, lovers of money, boasters, proud, blasphemers, disobedient to parents, unthankful, unholy, unloving, unforgiving, slanderers, without self-control, brutal, despisers of good, traitors, headstrong, haughty, lovers of pleasure rather than lovers of God,  having a form of godliness but denying its power. And from such people turn away! (2 Timothy 3:1-4)

We as Christians could very quickly deny that we had anything to do with these sins.  We are God’s children, after all, and love Jesus.  We steadily go to church and sacrifice our time to serve the Body of Christ.  Unfortunately, good deeds don’t cancel out a heart that is ungrateful for the blessings of God.  These blessings could be as small as a good deal at the grocery store, or as great as a miracle in our health.

Now it happened as He went to Jerusalem that He passed through the midst of Samaria and Galilee. Then as He entered a certain village, there met Him ten men who were lepers, who stood afar off. And they lifted up their voices and said, “Jesus, Master, have mercy on us!”  So when He saw them, He said to them, “Go, show yourselves to the priests.” And so it was that as they went, they were cleansed.  And one of them, when he saw that he was healed, returned, and with a loud voice glorified God, and fell down on his face at His feet, giving Him thanks. And he was a Samaritan.  So Jesus answered and said, “Were there not ten cleansed? But where are the nine? Were there not any found who returned to give glory to God except this foreigner?” And He said to him, “Arise, go your way. Your faith has made you well.”

This story is an example of Jesus’ willingness and ability to heal the sick.  It is also an example of thankfulness.  Out of the ten lepers, one man alone came back to express gratitude.  En route to share his testimony, this man suddenly realized that another Person deserved honor.  That Jesus’ miracle-working power went to work for him was more than enough to inspire a grateful heart.

From this story, we can learn some important lessons:

Sadly, the other nine lepers were too engrossed in their excitement to pay Jesus a second visit.  They forgot to recognize the One who made their healing possible.  Like the Samaritan, we should never get so distracted by our blessing that we fail to acknowledge the Source.  For us, distractions may come in the form problems, a craving for more blessings, or the inability to recognize who our Source really is.   If we get distracted for a moment, we should stop and return to our Master to show our appreciation.

Remember Who We Are

The grave commentary of the other nine lepers is that they left the praise and thanksgiving to a foreigner.  The thankful leper was a Samaritan who didn’t have any right to the covenant blessings the Jews enjoyed.  Instead of rushing away, the Israeli countrymen should have set the example by acting out of their honored role as Jews.   Just as they did, we may be tempted to leave our role as thankful Christians to someone else.  We may find ourselves slipping out of our honorable positions as kings and priests by forgetting our heritage.  As Jesus-followers, however, we should be alert to never let our trademark of gratefulness disappear.  If anyone should be thankful, it should be us!

The Samaritan could have followed his leper friends’ examples and rushed off to see the priest with no thought to the Man left behind.  He could have been more concerned about his reputation and following protocol than for what thankfulness would demand.  Instead, he abandoned the thought of “fitting in” and hurried back to the Master.  As the world wears on us, we too may be tempted to “conform” to the world.  We may be feel pressured to gripe and complain like the rest of an ungrateful world in the Last Days.  But if we are truly His disciples, our hearts will be more toward loving Him with thanksgiving than in feeling comfortable with our peers.

Notice the Samaritan’s thanksgiving was not done casually!  With a “loud voice” he came hurrying back to Jesus.  He didn’t just stand before Jesus and shake his hand, but “fell down” at His feet as a sign of worship.  He didn’t care who saw his show of thanksgiving.  He understood that true thankfulness doesn’t care who is listening.  It expresses itself loudly!  We would do well to follow his example when expressing praise to the One who deserves it!

The most important result of thanksgiving is that it brings glory to God.  While complaining keeps our focus on ourselves and what seems wrong, thanksgiving turns our attention toward God and His goodness.  People around us will hear our testimony and will see God for who He really is.   It begins a cycle of recognizing the nature of God and His power.  The more people hear our thanksgiving and praise, the more people will put their trust in the Lord and have reason to be thankful as well (Psalm 40:3)!

Will we always feel like giving thanks for God’s goodness in our lives?  No.  That’s why God gives us this command:

. . . in everything give thanks for this is the will of God in Christ Jesus for you. (I Thessalonians 5:18)

Notice that it says “in everything give thanks.”  God hasn’t asked us to give thanks for everything, but to have a thankful attitude regardless of what’s going on around us or to us.  Naturally, at times we will feel like keeping our focus on what seems wrong.  But when we make the choice to put our feelings aside and focus on what God has done for us, our feelings will change.  Our hearts will begin to overflow with gratefulness as we remember.  As we vocalize our thanksgiving, suddenly what seems wrong will pale in comparison to the blessings that we had forgotten!

2 thoughts on “The Spirit of Thankfulness”