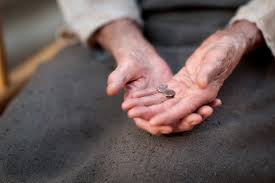 Two tiny eyes peered from the hole in the stone wall, flitting this way and that as they searched.  At last the owner of those eyes ventured from his darkened abode and stole across the hard, cold stone floor.  His silent little paws moved him toward the base of a rustic wooden cabinet in the corner.  His whiskers twitched as he sniffed the cracks between the stones.  Nothing.  Once again the gray mouse was deprived of his daily bread.  Crumbs had been scarce the last few months, but recently they had vanished all together.

Disappointed, he plopped down on his haunches and stared about the small cottage housing his own home.  Though cleaner than a priest’s white robe, the stone interior was also bare.  No drapes, no rugs.  Just a rickety stool near the window and a cabinet by the wall.  Even the sun was not allowed to bathe the stones with its golden light.  The shutters were closed for almost every hour of the day, keeping the corners dark and cold.

Suddenly the mouse stiffened.  His ears perked up warily as a faint sound moved in on the silent atmosphere.  Footsteps!  Turning his tail around, the mouse scampered back to the safety of his little hole.

A moment later the shuffling footsteps reached the door.  The entrance was then flooded with light as a stooped figure entered the house.  The light only remained a few moments, however.  With a creak the door was shut once again.

The person moved toward her stool in the corner and let out a sigh as she sat down.  With callused fingers the heavy brown veil over her head was removed, revealing long gray hair and an age-weathered face.  Puah was only fifty-two, but a hard life after her husband’s death several years previous had worn her down to look like a weak old woman.   Her shoulders were thin and stooped, tired under the weight of worry and pain.

The woman’s weary gaze roamed the single room.  Was this her fate?  Was she to die in a cheerless, empty room with a pantry barren of even a crumb of bread?

Once again footsteps were heard outside the house. Puah turned to open the shutters and looked out to the bright outdoors.  A large group of people talked cheerily amongst themselves as they passed by on the street.  A few steps behind them came several more, and like the first, carried small bags of money.  The widow’s heart leaped within her frail body.  It was the day to bring offerings to the temple!

But as soon as the excitement arrived, it disappeared.  She had nothing to give.  Nothing.  It had been ages since she had held even one small mite.  The compassion and pity of her neighbors had been all that had sustained her these last few months.  Yet now she yearned to give.

“Oh, God of my fathers,” she cried, “the psalmist said he had not seen the righteous forsaken, nor their seed begging bread.  Here I am now, oh great Jehovah, a poor, starving widow in need of bread.  Have mercy on your maidservant, I pray, and grant me something to give.”

Puah turned from the window and returned to her stool.   Across from her stood the old cabinet her husband had made to grace their new home when they were married.  She had sold everything to buy sustenance after poor Thomas’ death.  Only this weathered piece of furniture had remained because she hadn’t been able to sell it.

Now an overwhelming feeling urged her to search the compartments.  She stood and shuffled across the floor and began to open the cabinet doors.  Finally she reached the last door on the bottom . . . and there lay two mites.

“Oh, my Lord!” Puah exclaimed, scooping up the precious coins.  “You have heard my cry!”

Two mites were the least one was allowed to give in the temple offerings.  But it didn’t matter.  She now had something to give!

With new strength in her bones, Puah hurried from the house.  Her anxious feet carried her down many streets until she reached the temple where she would plant her seed into Jehovah’s work.

Inside the busy temple, thirteen trumpet-shaped chests lined a far wall.  Each was designated for different needs.  Without hesitation, she hurried over and tossed her two mites into the one marked for the poor.

As the mites clinked onto the coins inside the chest, Puah did not realize a man in the corner was noting her actions.  He turned to a cloister of men behind him and said, “I tell you, that poor widow cast more in than everyone else who has given.  They cast in out of their abundance, but she, out of her lack, cast in all that she had.”

Puah left the temple, feeling more strength and joy than she had experienced in months.  She walked upright with a spring in her step, a smile gracing her wrinkled face.   Inside was a knowing that her God would provide for her every need.

Her pleasant walk soon ended and she neared her small home.  As she drew closer, she noticed a large basket on her front step.  Curious, she knelt before the heavy package and peaked inside.  What she saw made her gasp.  Inside were a colorful assortment of fruits, several loaves of fresh bread, and a bright, new purple outer garment.  In the corner nestled a leather bag.  Puah reached in with a trembling hand and scooped up the small pouch, tipping it up side down to allow the contents to spill out.  Her eyes grew wide as glimmering coins fell into her lap.

“Oh, God,” she wept joyfully.  “You have kept your promise and have turned my two mites into plenty.  You are my Jehovah-Jireh!”

“Give, and it will be given to you: good measure, pressed down, shaken together, and running over will be put into your bosom. For with the same measure that you use, it will be measured back to you.”