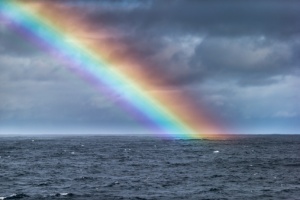 In the Texas Panhandle, weather is really fickle. One hour it’s a balmy eighty-five degrees, and the next hour it’s spitting sleet. I’m not at all exaggerating! If you’re looking for a four-in-one climate, just drop by for a few days. You’ll get a taste of all seasons!

On some of those annoying days when I don’t know what to wear, I wish I had a climate remote. If a picnic is on the calendar, I could just push a button and have instant sunshine. On the day of a wedding, with just a flick of my finger I could change cold and windy to warm and calm. It’s an instant, self-adaptable atmosphere just for me!

Unfortunately, such a gadget hasn’t been invented yet . . . but there is an atmosphere over which we do have control. It’s the atmosphere of our lives. Regardless of the situations around us – good or bad – we can choose whether or not they influence us.

In Mark 4:35-41, we see a classic example of two different people and how they responded to their “atmosphere.” Jesus and the disciples boarded a fishing boat for a cruise, only to be swept up in a vicious storm. Jesus had long been asleep, but the disciples were overwhelmed by the giant waves and crazy winds. Their cry for help woke Jesus up. Not to be daunted by a downpour, He kept His peace and commanded the storm to stop. Instant calm settled over the scene. The hero was not the stressed out disciples who slaved for hours bailing out their boat. Jesus, the one who kept His peace intact, was the one to thank for their salvation.

If Jesus had been influenced by what was going on around Him, I predict there would have been twelve funerals the next day. In contrast, instead of allowing the storm and other people’s opinions and attitudes to decide His future, Jesus took control and recreated His atmosphere. This is the power of someone who isn’t ruled by their emotions, but is ruled by the never-changing promises of God. The disciples looked at their circumstances and let their emotion of fear cause them to panic; Jesus trusted in God and allowed peace to put Him to sleep in the middle of the storm. He then had enough trust to speak a word that would change the storm from chaotic to calm.

Just like Jesus proved, God’s spoken Word changes everything. The first and most important way to change our atmosphere is to speak God’s promises. Death and life are determined by what we let out of our mouths (Proverbs 18:21). If what we’re speaking is depression and doubt, then depression and doubt is exactly what we’ll have in our lives. If a cheerful, blessed atmosphere is our choice, we should speak only what we want to see in it!

Every day habits and decisions count if we want to be surrounded by a pleasant atmosphere. A “Word-influenced” person will steer a conversation from something negative to something positive. They are cheerful, grateful, and thankful, even when no one else is. They choose wisely what they listen to, read, and watch. They start their day right with prayer and Bible reading. They choose their friends carefully because they know that who they hang around the most will influence who they are and what they think. This person enjoys an atmosphere of peace simply because of their choices. When a storm comes up in their lives, they have the strength to keep that peace.

The world worries over and is controlled by many things. However, if we’re in Jesus’ boat, we are loved, protected, and provided for. That boat won’t sink as long as our trust is in the One who gave us our “boat” in the first place. God wants us to live forever in the peace He’s promised. The choice is still ours: Will situations and people create our environment, or will we decide what atmosphere will surround us?