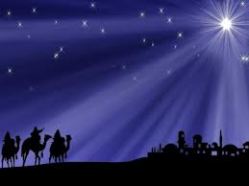 I’ve never seen a nativity set without three wise men huddled around the manger.  Usually at least one camel is present, representing the wise men’s long journey.  Every figure is robed immaculately and holding out beautiful gifts of gold, frankincense, and myrrh.  They came prepared, expecting to find royalty at the end of their trek.  They didn’t expect a child because they had spent years studying the galaxies.  They didn’t reach their goal because their money bought them the finest tracking gadgets.  They found the Messiah because they stayed connected to God’s method of leading. They followed the star. (Matthew 2:1-12)

Matthew 2:9 says that the star “went before them.”  It wasn’t hovering over them, following them, or pushing them on from behind.  It always stayed where the wise men could see it, directing their next steps forward.  I cringe to think what would have happened if the wise men had given up following and tried to route their own way to Jesus.  What a tragedy if they had turned back because the trip was taking too long, they couldn’t stand each other’s company anymore, or they were pining for the comforts of home.  The Christmas story wouldn’t have been the same.  Jesus wouldn’t have received the gifts that God used to provide for His Son’s earthly needs.  The wise men wouldn’t have received the reward for their efforts, gained an inspiring story to share with their children, or been included in the manger scene two thousand years later!

Unfortunately, every one of us has stopped following the star at one point or another.  We’ve gotten discouraged when we weren’t reaching the end how and when we wanted.  We’ve gone back to our past, thinking we’ve missed something.  In times like these, Philippians 3:12-15 exhorts us to keep moving ahead: “Not that I have already attained, or am already perfected; but I press on, that I may lay hold of that for which Christ Jesus has also laid hold of me.  Brethren, I do not count myself to have apprehended; but one thing I do, forgetting those things which are behind and reaching forward to those things which are ahead, I press toward the goal for the prize of the upward call of God in Christ Jesus.  Therefore let us, as many as are mature, have this mind; and if in anything you think otherwise, God will reveal even this to you.”

Like the wise men, God has set a prize in front of us.  We won’t see it, however, if we’re getting distracted by our past mistakes, hurts, disappointments, or even our past joys.  Jesus is asking us to focus on Him, our Star.  Our past may draw us back, but when our eyes are on our star, we’ve got to remember that He is leading ahead, not pushing from behind.  He’s in our present and future, not hanging out in our past.  He’s trying to take us to an exciting place where He alone can take us.  He’s asking us to forget what’s behind and reach forward to where He is.

I believe we all want to be “wise men,” mature like Philippians 3:15 says.  In God’s eyes, wise and mature people “forget those things which are behind.”  They press forward because people who follow their star always get the prize!