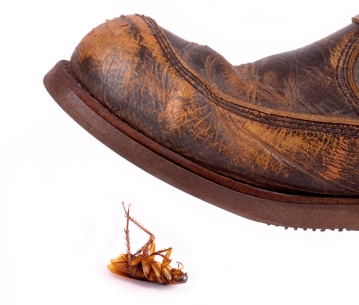 At one time I used to depend wholly on my dad to rid my world of these things called “bugs.”  When crickets began their annoying symphony under my bed at midnight, guess who I called from the comfort of my mattress?  When a spider decided to make its descent from the ceiling above my head, guess who was the exterminator?  You guessed it.  It was my hero – Mr. David Heider and his shoe.

I soon discovered that when you live on your own, it’s not very convenient or polite to call home every time a cockroach meanders across the dining room floor.  So I learned to squish the villains myself (preceded by about ten minutes of psyching myself up for the challenge).  Then when I moved from my apartment to a trailer in the country, a whole new world of bugs was opened to me . . . in the form of giant, furry wolf spiders.  My first encounter required about twenty minutes of prep time, even though my weapon was a bottle of Raid from about five feet away.  Yes, I was a big girl now.

After dealing with bugs, a dead mouse, and a loose baby bird in my country home, I finally came to a grand conclusion – I am bigger than them all.  Why should I be frightened by something so minute compared to my five foot, two inch stature?  One little sweep of whatever was closest and – squash – it was over for the creature.  (Okay, I didn’t squash the poor bird.)  What empowerment!

Applying the “I’m-bigger-than-them-all” principle to life’s challenges, though, is a little different story for most of us.  We come face to face with our “bugs,” and suddenly we don’t have what it takes to be the victor.  We start thinking like the ten spies in Numbers 13:33 who came back to Moses with a negative report: “There we saw the giants . . . and we were like grasshoppers in our own sight, and so we were in their sight.”

Without an understanding of Who lives on the inside of us, our challenges can seem huge – like an eight-legged wolf spider ready to pounce.  But I John 4:4 declares: “You are of God, little children, and have overcome them, because He who is in you is greater than he who is in the world.”

We can very easily shrink back from the giant looming in front of us and say, “I feel like a grasshopper compared to this!”  The truth is that we are anything but a miniature grasshopper.  God sees us as “more than conquerors” through Him (Romans 8:37).  It may seem that the giant insect is glaring down at us as if we are so small, but its misconceived opinion doesn’t matter compared to the reality of our size.  Our size is based on the size of our hero, the One who holds the power over everything.  It’s not us against Mr. Wolf Spider; it’s God against the enemy.  No longer do we have to decide our strength based on the size of our shoe, the potency of our Raid, or the force of our trap.  It’s now dependent on the strength of the One who lives in us . . . and His strength is endless!